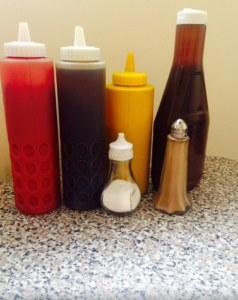 Between Oxford Street and Piccadilly is Soho, central London’s most genuinely eclectic district. Jazz clubs, jewellery wholesalers, record shops, strip clubs, Italian family delis, celebrity tailors and a barrel-load of pubs and bars – they all rub shoulders in this cosmopolitan parish. Soho is also still the hub and spiritual home of Britain’s independent media and creative industries with dozens of advertising agencies, television and radio studios and film post-production companies working out of this vibrant quarter.

Deep in the heart of Soho lies Berwick Street, home to one of London’s oldest street markets.  For more than 200 years barrows have been set up every morning to sell fresh fruit and veg to the denizens of Soho. These days the market is expanding and transforming into a bustling foodie destination full of concept traders, and authentic falafels and sourdough sandwiches are on offer next to the traditional cauliflowers and carrots.

Jola has worked in the Soho media world for over 20 years.  She has extensive experience of making commercials, corporate films, creating brand identities, of working with programme makers in television and feature films; she has worked with marketeers and advertisers in the fast moving goods, in the luxury goods market, fashion, children’s toys and West End entertainment and publishing. When she spent two years based in offices on Berwick Street, she grew fascinated by the rhythms and business of the market. She would walk through it as the barrows were being positioned in the morning, see the complex display of fruit and veg as it was arranged and at lunch time she would pop down at a bustling lunch time for an apple and a chat with the traders. And from her office high above the market, she knew the day was coming to an end when the market traders started yelling their reduced prices on fruit that would be no good tomorrow,

THE SOHO SYSTEM introduces a totally new marketing and branding method inspired and informed by the life, business and unique creative energy of this curious village in the West End of London. It reveals the trade secrets of the creative industries, and shows how the the flexibility, ingenuity and energy of everyday creativity can combine with sound business and communication practices to build brands that can work and thrive in the twenty-first century. In THE SOHO SYSTEM we will unlock the secrets of creative thinking and show how creativity and marketing can work together to define your strategy, focus and develop your brand and grow into a nimble, successful business.

Connect with me on LinkedIn